Days in the bubble, aka our stunning yoga retreat centre, pass quickly and fluidly. One and a half hours yoga and Pranayam at 7am, breakfast thereafter. Then people flock off to do their things: Meandering down to the beach, getting a coconut or chai in town, reading, writing, meditating or heading in for an ayurvedic on-site treatment… Before you know it’s 5pm and time for an hour of yin yoga followed by half an hour of meditation. Then the amazing kitchen team churns out a different delicious Indian meal every night. By then, as you can tell with all that busy-ness, everyone’s exhausted and happy to wander off, usually after lots of laughter and always some insight and learning, to their cozy beds. 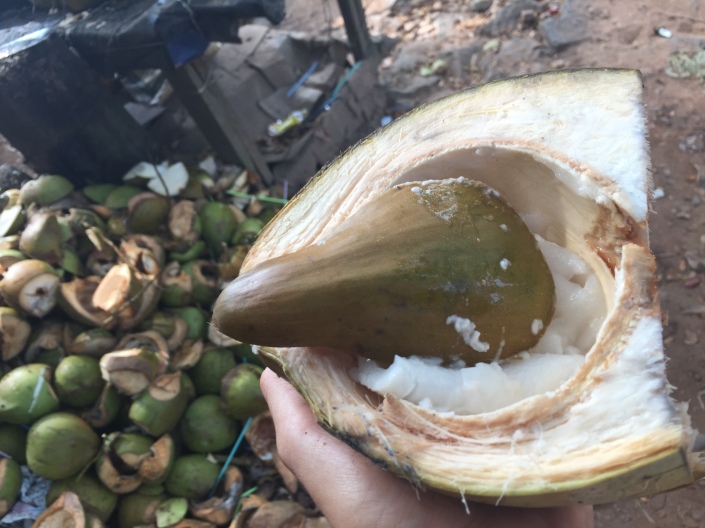 Yesterday, it was once more time to leave the safe haven. The excursion was going to take us to the most Southern tip of India, Kanyakumari. After a little late start – Indian timing – we were at the checkpoint to Tamil Nadu, the neighbouring state. Despite prior warnings that it was going to take hours, our driver took a mere five minutes to get the paper work and diverse stamps sorted. India. Just enough time to drink a quick coconut and hangout with the locals for a moment around the coconut stall – the equivalent here to Italy’s busy expresso bars in the morning.

Half an hour further south we stop at the majestic Padmanabhapuram Palace – a timber forest with intricately carved rosewood ceilings and polished-teak beams labyrinth. Another stunning palace complex owned by Kerala’s Royal Family. They have kindly opened up their ancient quarters to humble visitors like us, whilst contenting themselves with a 105-room modern, European style palace near Therandrum. The story goes that three of their rooms are occupied with pure gold, kept safe until a more suitable way is found to deal with all their wealth…

Our next stop is a Hindu temple maze which took eight generations and four kings to build. Never have I gasped that much at mystic beauty and magical building details. Extracts of the Kamasutra are depicted on many of the pillars framing a central temple complex in which deities reside different zones. Near the monkey god Hanuman a musical passage is built so that each of the one-piece granite pillars here makes some sort of mystical drumming sound. Fascinating! When we stand in front of the golden Ganesha (the obstacle-removing elephant god) after having been guided past the shrine of vedic astrology and honoured all the planetary constellations, a big thunder roars outside. Have our prayers been heard? It feels like a direct line to the Gods is open.

Kanyakumari – the tip of India 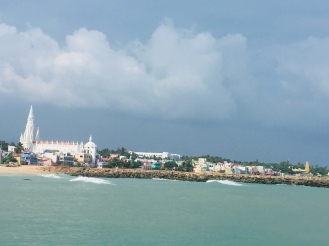 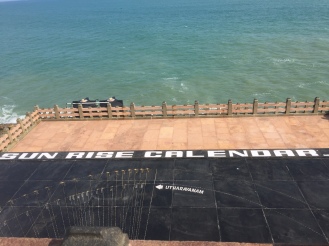 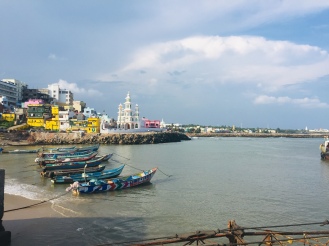 The most southern point of the Indian sub-continent is crowded by local tourists, eager to get on the ferry to the rock where Swami Vivekananda had his revelations of spreading the yogic teachings around the world. The most insightful part of this crowded, loud journey, surviving the rustiest boats and hundreds of pictures taken of us in various selfie positions, is the peaceful haven that- comes to us in form of a meditation hall under the massive shrine. Twenty minutes of OMing peace and quiet – a luxury in this always crowded, always busy, always loud country. Slightly revitalized we gather enough energy to head back to grab a chai in town. Two ferries come and go without taking on any of the ever growing queue. Why? Only the Indian ways might know which will probably forever remain a mystery to us.

After a brief detour to Vivekananda’s Wandering Monk Exhibition we are keen to have a quick look at his photography display in his ashram a kilometer up the road. Unfortunately, our driver won’t budge to this request, eager to return home at his earliest convenience. We are aware that we have already been ridiculously ripped off by our hotel as the 3,000 IR we have paid for the day trip stands in no relation to the equivalent government run tours at 700 IR, not to mention the local bus that would have gotten us here for 70 IR.

We are aware that we are none to start a conversation about injustice and fairness, as the current organisation of the world has left us far better off simply for having been born in wealthier countries. Nevertheless we drive home earlier than hoped with a slightly bitter taste in our hearts: Our driver’s grumpy stubbornness, in addition to a lack of communication, every nice guide turning into a deamon at the end of any tour when no one ever seems to be able to tip them enough to keep them smiling and a constant underlying energy of being seen as a walking dollar sign has just taken out the last bit of energy for the day. Back in the bubble, I fall into a deep slumber and for the first time since arriving here dream of my children and home. 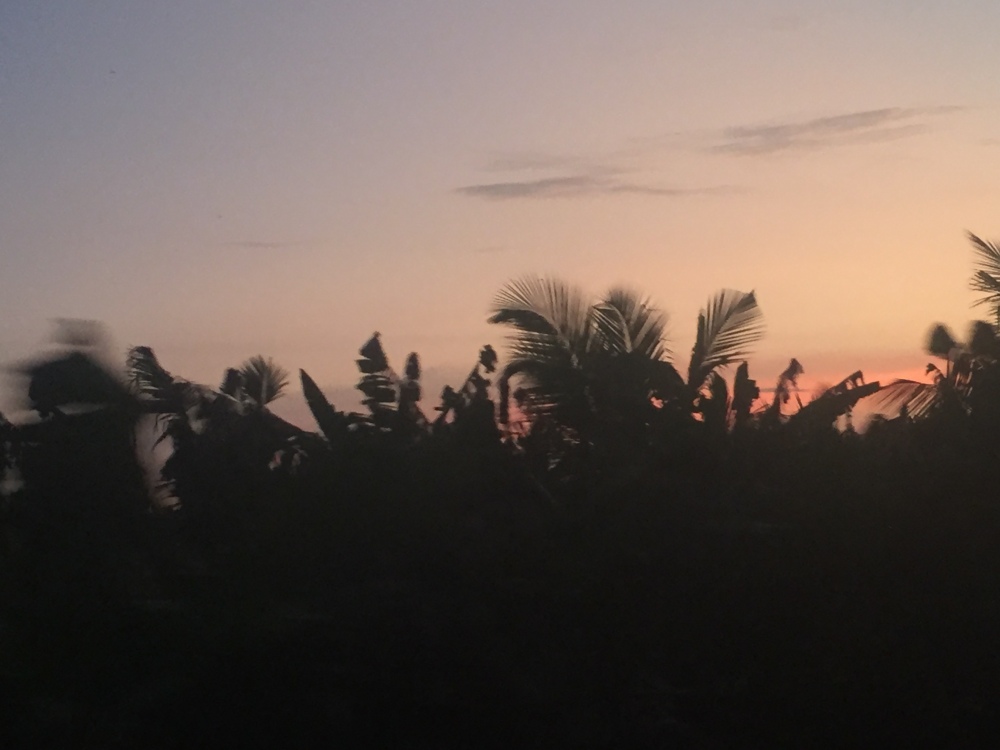